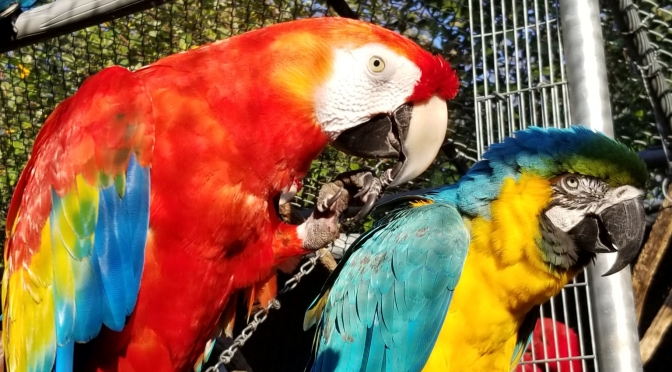 We often think of parrots as pets. But technically speaking, they are undomesticated. Not enough selective breeding has occurred to cause significant changes. A parrot that was hatched as a result of domestic breeding is essentially identical to a parrot hatched in its natural environment. Ergo, there is no such thing as a domesticated parrot.
But because they are intelligent and inclined to live in social groups, they can appear tame. And they can imitate human speech, a feature that further inflates their popularity.

In 1983, the import of wild parrots into the United States was banned. So, domestic parrot breeders stepped up their production to supply the growing demand for parrots as pets. What that increase in domestic parrot breeding created was an inundation of parrots that are predisposed to obsessive/compulsive disorders, plumage mutilation, skin mutilation, and a variety of other neurotic behaviors.

So, you have undomesticated wild prey, that are intelligent and socially engaging. People fulfill their exotic fancy by purchasing them in vast numbers, only to bring them home and find out they bite, they scream… and they develop emotional and psychological pathologies that are easily as profound as that which humans suffer from.

An Update on Last Year’s Inductees

Odin can be quite a handful. While his mate, Frigga, is an innocent and timid girl. Odin challenges all authority and tries to dominate the scene. He’s been a real headache for the other Macaws. But they’ve shown him a unified front. I’m confident that with their guidance, Odin and Frigga will settle in.

Mr. Huff seemed to know he was home when he arrived. He clearly enjoys all that life at Garuda Aviary has to offer. And the other Moluccans have been generally accepting of him. Huff is well on his way to becoming a fully fledged member of the Moluccan sub-flock.

Havoc is exactly what we would expect, given the breed and history. Violent aggression is typical for Medium Sulphur Crested Cockatoo. And when they are captured and smuggled from their natural habitat as Havoc was, the trauma makes their violent aggression much worse. Which is why this bird had received a veterinary recommendation for euthanasia.
Imagine. That would have been the sum and total of Havoc’s life; violently captured and smuggled from the wild, rejected from one home to the next because she is terrified and reacts in the only way she knows how, with fear aggression. Finally she finds herself being sold at a flea market like unwanted rubbish, and then euthanized. How pitiful. The freedom of a majestic life savagely curtailed to unsuccessfully satisfy the exotic whimsy of a misinformed public.
Thank goodness she showed up on Garuda Aviary’s radar! We have a lot of experience with traumatic emotional problems like Havoc’s. And we won’t be offended by her fear-based aggression. The more she bonds with her new flock, the less compelled to behave that way she will be. From flying with her new compadres, to chewing up a steady supply of homemade toys, Havoc will find purpose and belonging in an environment that is especially suited to her needs.

While it may seem quiet in the winter from the outside, there is still a lot going on inside of Garuda Aviary’s climate-controlled facility. This winter will see the construction of the new twin Macaw habitats. Keep an eye on our Instagram account for pics of that project, along with many other wonderful photos.
Also, Garuda Aviary will be featured on Atlas Obscura/WAMU, (D.C.’s NPR affiliate) their new series called “Hidden City,”. Stay tuned to our Facebook and Twitter feeds for updates on when in December that show will broadcast.

It’s Always the Season for Giving

When most people hear about animals that have been discarded, mistreated and abandoned, they feel sympathy and pity. Most wish they themselves could rescue the animal and bring it comfort. But very few people are equipped to provide a good life for the types of animals I’ve been reporting on. Very few people are in a position to physically help. That is why non-profit rescues and sanctuaries like ours are so important. Garuda Aviary is a specialized facility. We know exactly what to expect from highly demanding animals like these. And we are equipped to meet their needs. Here, they can form bonds with parrots of their own kind. We have the space for them to fly around, socialize and play. If they want to vocalize at the top of their lungs, they are welcome to. We wear earplugs. Parrots, in general, are fairly destructive. Cockatoos are particularly destructive. That’s fine too. We make parrot-safe toys for them to destroy. We provide a diet customized to a parrot’s unique biology. And when the need arises, we have access to highly experienced, specialized veterinary care.
Without Garuda Aviary, intelligent, sensitive animals like Havoc, Mr. HufflePuff, Odin and Frigga (plus the majority of our flock) would have continued to suffer, become more and more marginalized, and eventually euthanized.
But you can’t realistically smile, turn away and act like these problems are covered permanently. It doesn’t work that way. There will always be parrots in need. And we cannot tackle the issue alone. We must work together to effectively make a difference. Garuda Aviary can provide the hands-on care that most can’t. That’s what we do. But we need your support to fuel the operation.
Monetary donations are obviously the most effective way to help. Now I know when we think about making donations, we feel a little pang of anxiety in our wallets and pocketbooks. Most folks aren’t rolling in money and don’t feel like they have much to give. But it is still possible to make a difference without breaking the bank. Usually, facilities like Garuda Aviary aren’t funded by a small number of people making large donations. It’s better when a very large number of people are making small, regularly scheduled donations. We all have numerous automatic charges made to our bank accounts and credit cards every month that pay for our online music and movie streaming. Modest recurring payments for services and nonessential utilities that make our lives run more smoothly. If everybody who ever saw an animal in need and wanted to help took a few minutes to set up even a modest recurring donation to a non-profit organization that rescued and cared for those animals, then they really could smile, knowing that they were absolutely making a difference. That the money spent was well worth it because it relieved some suffering or made some nurturing care possible.

Now with PayPal Giving Fund, you can donate to Garuda Aviary without paying any fees! And every penny of your donation goes directly to giving a parrot like Havoc a second chance at life.

Garuda Aviary is a 501(c)3 non-profit parrot rescue and lifelong sanctuary. Your generous donations are tax deductible to the full extent allowed by law.