Our birds include several types of Macaws and Cockatoos, African Gray parrots, Amazon parrots and Conures. Each of them has a story – many filled with abuse and neglect. Several of the birds have become so neurotic that they cannot be easily cared for. Other birds in Garuda Aviary have coped with their past trauma by becoming aggressive and difficult to handle. Because we wish to break the cycle of suffering, Garuda Aviary does not adopt out its parrots. Instead, we provide sanctuary until the end of their natural lives. 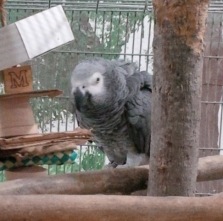 •Allegro- (nickname: Alleg) Illegally stolen from his natural habitat and then purchased by a parrot breeder. Alleg growls at humans (most likely due to the trauma inflicted during his capture).
Bonded to: Amita

•Amita- Sweet and cuddly with humans, but an absolute tyrant with other Greys. Previously bonded with ThunderBird. But once she got a look at Alleg, poor ThunderBird got the cold shoulder!
Bonded to: Alleg

•Emily– Despite being wild-caught, this 30+yr old girl is very sweet. It’s impossible to not love her. She has the funniest things to say!

Flaire– A very shy, reserved guy, despite his name. But if you get too close, he will feel free to express himself by giving you a painful bite! 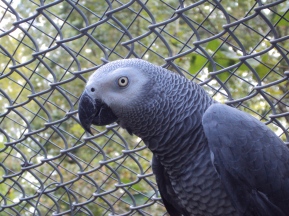 •McGyver- A grumpy guy that will bite any finger that gets too close to his cage.
Roommate: Sydney.

•Symphony- (nickname: Sydney) A Timneh African Grey that teamed up with McGyver. These two are intent on causing as much trouble as possible.
Roommate: McGyver 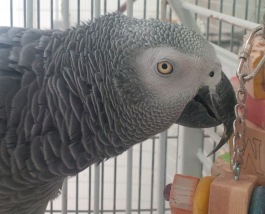 •Baby Double Yellow Headed Amazon. He sounds like an absolutely delightful fellow when he speaks in his adorable voice. But don’t let him fool you. He bites! Hard!
Roommate: Ringo.

•Ringo- Lilac Crested Amazon. Around 30 years old. He was overwhelmed when he first arrived a Garuda Aviary. Teaming up with Baby provides him with a sense of security and belonging.
Roommate: Baby.

•Green Guy- a shy and reserved Red Crowned Amazon. He’d rather stay in the back of his cage and play with his toys. But like most Amazons, Green Guy has a large repertoire of curious calls and noises. Read more about Green Guy

•Scarlett- Gold Capped Conure. Somber, and (you guessed it!) loud! If her diet is even a tiny bit too rich, she starts to lay eggs.
Roommate: Chewy, Lolly

•Rosie- a spirited and energetic Sun Conure. While otherwise physically normal, she has a deformed foot with only one rear toe. But she doesn’t let that slow her down. Rosie calls relentlessly for attention until our director (Christopher) lets her climb up on his shoulder. Read more about Rosie

•Yinoki- This high spirited little guy was hesitant to jump into the social scene at first. But once he did, he became the life of the party in the Conure flock! 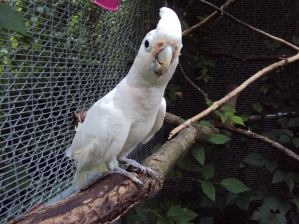 •Cosmo- Long time member from Arizona. When Tappi arrived, it was love at first sight!
Bonded to: Tappi

Jumpy– An energetic, inquisitive guy with an undying fascination for metal objects. Best frenemies with Trevor. 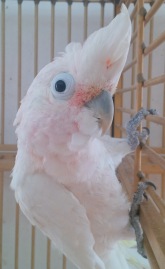 •Tapioca- (nickname: Tappi) When he first arrived at Garuda Aviary, Tappi  had a nasty habit of chewing a hole in the skin on his leg. But no more. Now he only thinks of Cosmo.
Bonded to: Cosmo. 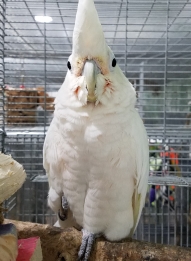 Trevor– This little girl will play coy, but drop your guard, and she can turn fiercely aggressive! in a love/hate relationship with Jumpy.

•Coco- Scarlett Macaw. Both Coco & Jack came to G.A. from the Prescott Heritage Zoo in Arizona. Coco threatens and bites women,  but she loves they guys!
A member of the primary Macaw flock

•Damara- Hyacinth Macaw. She’s Director Christopher Zeoli’s big baby! He calls her his “Big Blue Boo Boo”. She’s the biggest, strongest parrot at G.A., and Christopher is the “Alpha Bird”. So Damara’s natural reasoning tells her that they must be mates! As a result, Damara gets very territorial over Christopher. Watch out, ladies! 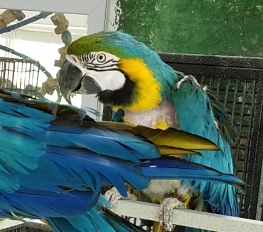 •Frigga– This timid girl is seriously in love with her bold mate, Odin. Read more about their journey together!

•Harry- Blue & Gold Macaw. Illegally stolen from his natural habitat as a fledgling in 1969. When he first came to G.A. Arizona in 1998, he was profoundly traumatized and dysfunctional. After years of rehabilitation, Harry is stable, secure and confident. In fact, he’s one of the leaders of the primary Macaw flock. And he has the love of the beautiful Blue Throated Macaw, Jade. Read more about Harry’s difficult journey

•Hakan- Green Wing Macaw. One of our first Macaws. This impressive and fiery beauty rules our primary Macaw flock. Howard & Rainbow both want to be her only love. But she won’t commit. She knows she has options!

•Howard- Blue & Gold Macaw. One of our first Macaws while in Arizona. Howard is a high status member of our primary Macaw flock. And he is a naughty relentless prankster!

•Jack- Scarlett Macaw. Both Coco & Jack came to G.A. from the Prescott Heritage Zoo in Arizona. Powerful and forthright, Jack has the spirit of a fighter!

•Jade- Blue Throated Macaw. She may be our smallest, most adorable Macaw, but don’t let that fool you. She’s a spitfire! She’ll even step up to defend her (much larger) boyfriend, Harry!
A member of the primary Macaw flock

•Mango- Blue & Gold Macaw. A bit high strung. Juggled from homes to boarding facilities, Mango finally found a home in G.A. and a friend in Merlin.
A member of the primary Macaw flock

•Merlin- Blue & Gold Macaw. One of our first Macaws. A noble soul, a “man of the people”, and a high status member of our primary Macaw flock.

•Odin– Just like his mythical namesake, this big guy is brave, strong, evenhanded and only has one functioning eye. Odin and his mate, Frigga had a difficult journey on their way to us. Click here to read more! 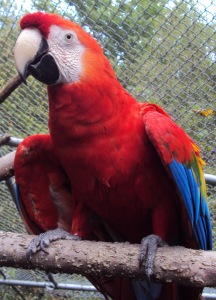 •Rainbow- Scarlett Macaw. Came to G.A. from the same home as Ya-Ya.  So naughty and so loud!
A member of the primary Macaw flock

Liberated from a disgusting failed parrot-mill where many parrots were found dead.
But their torturous story has a happy ending. That story is coming soon. Stay tuned! 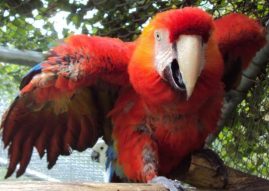 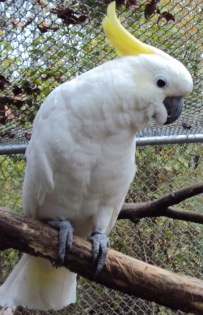 •Angel- Very aggressive. Does not play nice with others. Angel can turn a 5 lb. pine chew toy (made from untreated 2×4’s) into splinters in less then 12 hrs… Did I mention aggressive?

•Chiquita- (nickname- Cha-Chi) Wow, this guy is high-strung! In times of elevated stress, he has been known to have seizures (stress associated seizures are generally non-pathological in Cockatoos). Otherwise, Cha-Chi’s busy stirring up trouble with the other Medium Sulphur Crest Cockatoos

•Chloe- Reputed as intensely violent toward women, she’s actually been a real sweetheart with us.
Roommate: Ya-Ya

•Ya-Ya- Came from the same home as Rainbow. Quite a gentleman, as far as Medium Sulphur Crest’s go… Still highly precocious, though. Always the prankster.
Roommate; Chloe

Havoc– Wild-caught and extremely aggressive, the road to this forever home has been a difficult one. Click here to read more about it.

•Banshee- Juggled from home to home so much, he didn’t have a name. So Director Christopher named him Banshee because of the bizarre wailing calls he makes. Lucky for him, Talha has become his (somewhat dominating) girlfriend.
Roommates: Tara, Tahla

•Mr. HufflePuff- (nickname- Huff)  This big, powerful guy is a bit anxious and fearful around people. When he vocalizes, it’s so loud you can feel it in your bones! Read more about Huff!

•Talha- This bold girl has been with us for a long time. So she knows she has seniority and authority. And she uses it! If anything is amiss, Talha is the first to scream about it.
Roommates: Banshee, Tara

•Tara- Before arriving at Garuda Aviary, Tara was kept in a horse barn in Arizona. As a result, he would occasionally whinny like a horse.
Roommates: Banshee, Talha

•Bevis- (nickname: Cain) …and his roommate Spike are the highly skilled Masters of Mischief. These two boys are inseparable. And they are very serious about their mission; to cause maximum mayhem!

•Coco2- Found in a dumpster. A compassionate mother and her kids took this troubled guy in and fell in love. But alas, he could not stay. Read Coco2‘s harrowing story. 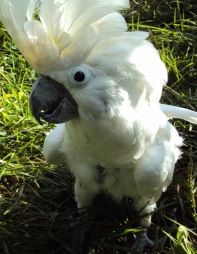 •Dutsi- This extremely intelligent fellow has been with us since    before G.A. began. 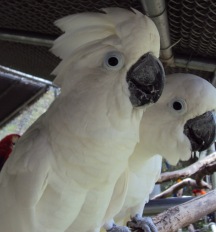 •Sedona- (nickname: Spike) You have to watch out for the quiet ones. This guy will sneak up behind you to give you a bite on the ear! And if his partner in crime, Cain is involved, you know you’re in for double trouble!
Roommate: Cain