Perhaps we ask, “If parrots are so ill-equipped to be in a domestic setting, why do we keep them as pets?”   A small minority of parrots are lucky enough to manage a healthy relationship with humans.  In those situations, there were usually sufficient recognizable influences in the environment that the parrot can manage to interact socially.  To a parrot, a family resembles a flock.  If there is a confident and benevolent leader figure present, the parrot will be naturally inclined to ally itself with that individual.  As is with dogs, parrots are compelled to observe hierarchy.  If there is no discernible chain of command or an easily recognizable “alpha,” the parrot will certainly act out. 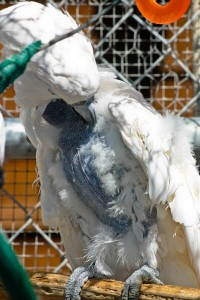 The advertising and entertainment industry are also responsible for the sustained popularity of parrots as pets.  For those purposes, a parrot with a plucking problem is never shown.  A young parrot is used because it has not usually started plucking yet.  It seems people don’t talk much about their pet parrot when it has emotional problems and plucks out its feathers.  It  has been theorized that these parrot owners see beautiful parrots on TV and in the movies and feel ashamed, as if they have failed their parrot in a way apparently nobody else has.  This ill-placed sense of shame prevents the parrot owner from looking for help or asking other parrot owners how they address the plucking problem.  The issue stays out of the mainstream and the problem just gets grizzlier.

Parrots come to us through two routes: either they are bred in domestication, or they are illegally poached from the wild.  The most common method of macaw poaching is when the nest is raided as the chicks leave their juvenile years.  The parents are often killed and the young have a tendon cut in their wing so that they never fly again.  Preparations to smuggle them into the country include shoving the parrots into short PVC tubes, which are packed like cordwood into suitcases.  Approximately two thirds of the parrots smuggled into wealthy countries like ours, do not survive.  The ones that make it are usually so profoundly traumatized, they become impossible to handle.

Domestic breeding isn’t much better.  Parrots don’t breed easily in a domestic setting. Breeders generally use wild-caught parrots because they are more likely to mate successfully. Since they don’t breed easily, a breeder generally keeps a high number of parrots in inadequate conditions.  Health issues and injuries are rarely attended to.  Many times the parrots are kept in perpetual darkness because it is thought they will breed more.  Best Friends is an animal rescue society devoted to saving a wide variety of species.  They communicate often with our Aviary.  Once they called us trying to place two Amazon parrots that were liberated from one of these “parrot mills.”  One bird had broken its leg and received no medical care, and the other had stood in one position for so long, that some of its leg joints were beginning to fuse.

You simply cannot buy a parrot without it having been subjected to at least some measure of extraordinary suffering.  The question is asked, “Why not just return them to their natural habitat?”  The problem is that like us, their instincts are intact, but buried under layers of learned behavior.  To function successfully in the wild, they need to see their own kind do nearly everything, even mate.  A parrot that hasn’t, will not know what to eat, what to avoid, or even the proper body positions for successful procreation.  Only 1% of parrots who have spent time in a domestic setting survive in the wild.  One educated attempt to repopulate domesticated parrots into their natural habitat included bringing in wild parrots of the same breed, and the foliage that sustained them. The idea was that if the domestic parrots watched their wild counterparts eat their natural diet, they would learn what to eat.  This well thought out trial ended in 97% failure.

For an ever-growing preponderance of reasons, it is the Garuda Aviary’s judgment and experience that parrots are not suited to be pets.  The parrot trade industry seeks to take this wild animal and turn it into a pet.  The Aviary reverses that position by letting the “pet” be the wild animal it needs to be.

Garuda Gala Fundraiser on June 22- Don’t Miss This One!

Our 2nd Annual Garuda Gala Fundraiser is happening this year on Saturday, June 22 from 1 pm – 4 pm at The Garuda Aviary in Poolesville, Maryland.

You won’t want to miss this informative and fun-filled day of music, dancing, food, fun and an opportunity to learn all about the Garuda Aviary, a non-profit Lifelong Shelter for abused, neglected and abandoned Companion Parrots. 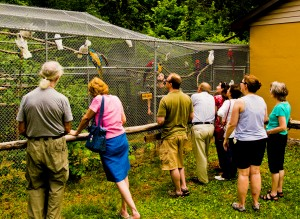 Our beautiful Parrots will be available for viewing during the entire event in the spacious Outdoor Flight Cage. Director of Avian Care, Christopher Zeoli, our very own “Bird Whisperer,” will be on hand to share his knowledge and expertise and answer any questions you may have.  Live music and dancing by the band “Crosswinds,” that features an eclectic mix of hits from the 60’s through today. We will have fun activities for children, and delicious food will be available for purchase, along with a bake sale, featuring lots of sweet treats.

Here is what one of the Aviary’s supporters had to say about last year’s Garuda Gala:

“What a day a great day! The parking lot was full, the band was playing, the food was delicious, the sun was shining and best of all, people were learning about Garuda Aviary! All day long people visited the Aviary. They watched our beautiful birds and heard their stories. Claire Waggoner, Aviary Executive Director, and Christopher Zeoli, Director of Avian Care, who is also Alpha Bird Damara’s mate (at least that’s what Damara thinks!) were on hand to provide information and answer questions. And there were a lot of questions! Many people told me they had no idea of the neglect, abuse and trauma that these birds experienced. “We always hear about the dogs and cats,” one woman said, “I never thought about the birds.”

“Personally, I think one of the highlights of the day was the fabulous live band. Their music created a celebratory atmosphere in a way that only a live band can. It seemed like everyone was telling me how much they liked their music, and what a difference they made by playing at the event. Everyone was so generous and all of the proceeds we raised will deeply benefit the birds of the Garuda Aviary. Many thanks to all who contributed. All in all, it was a GREAT day for the Garuda birds.”

Don’t miss this year’s event! Admission is Free. Donations are welcomed and appreciated, and all of the proceeds will benefit the Parrots of the Garuda Aviary.

Mark your calendars and plan to attend the 2nd Annual “Garuda Gala” Fundraiser on Saturday, June 22, 2013 from 1 pm to 4 pm at The Garuda Aviary, 18400 River Road, Poolesville, MD 20837.  For more information, please visit our website www.garudaaviary.org